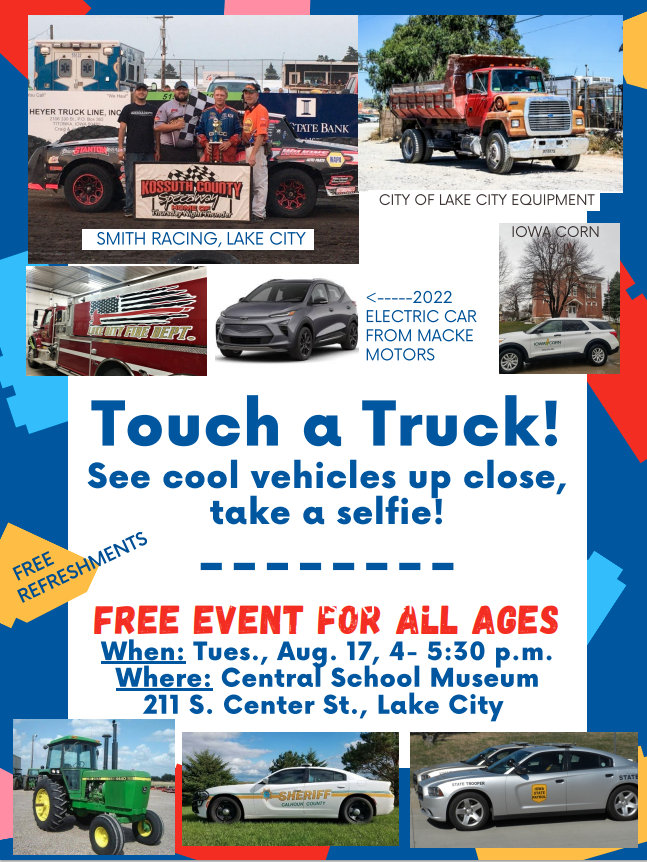 Life is too short to only have boring vehicles. That’s why Central School is hosting “Touch at Truck” on Tuesday, Aug. 17, 2021, from 4 to 5:30 p.m. outside Central School at 211 S. Center Street in Lake City, Iowa. Bring the kids, invite your family and friends, and come see cool vehicles up close, including cars from Smith Racing of Lake City, fire trucks from the Lake City Fire Department, trucks and equipment from the City of Lake City, a new 2022 electric car from Macke Motors, an Iowa State Patrol vehicle, a Calhoun County Sheriff’s Department patrol car, a John Deere tractor, and the Iowa Corn SUV. (Don’t miss Iowa Corn’s free giveaways for kids and adults!)
Check out the vehicles, take plenty of selfies, stop inside Central School for free refreshments, and bring the kids to story time. At 4:30 p.m. and again at 5 p.m., Central School Preservation board member Jan Dougherty will be reading the beloved children’s book, “Cars, Trucks and Things That Go!” by Richard Scarry.
We were inspired to host this unique event by the Winterset Public Library, which hosts Touch a Truck in their community. Please stop by for Touch a Truck on Aug. 17, and feel free to share this post.
Also, the Central School museum will be open for tours during this event, as well. We look forward to seeing you! 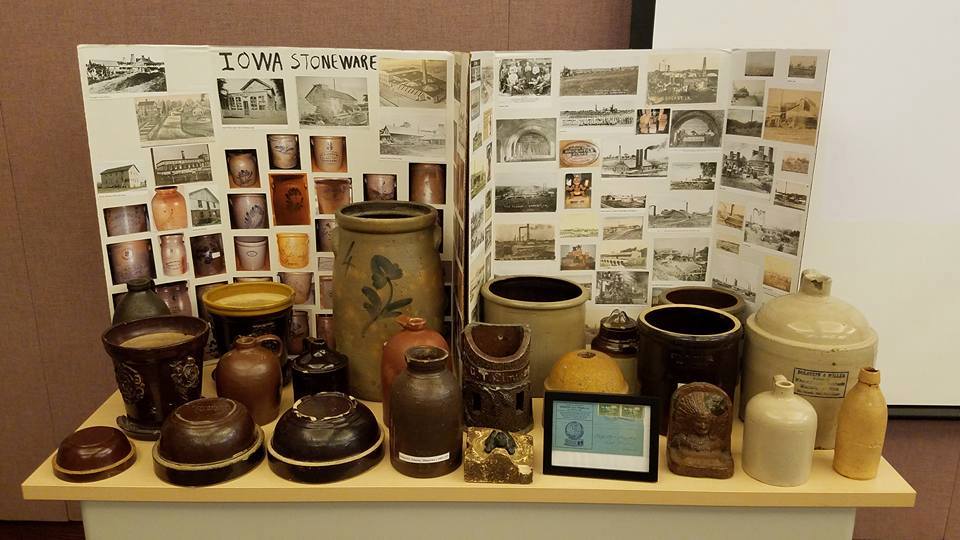 Ghost Pottery of Iowa Program Slated for Sunday, May 2, 2021

Many Iowa communities, including Fort Dodge, used to be major producers of stoneware, from crocks to jugs to flower pots. While pottery shops thrived in frontier Iowa from the 1850s to 1890s, many of these businesses had disappeared by 1900. Jeremy McLaughlin of Fort Dodge provides a fascinating glimpse into the history of these once-thriving pottery businesses. He will be speaking on Sunday, May 2, 2021, at 2 p.m. at Central School Preservation (CSP) at 211 South Center Street in Lake City. The “Ghost Pottery of Iowa” program is free and open to the public. Refreshments will be served, as well.

McLaughlin will also display a selection of his Iowa stoneware collection, which he has been building for the past 20 years. Get answers to your questions about antique Iowa-made stoneware, as well. For more information, contact Darcy Maulsby, CSP board president, at yettergirl@yahoo.com.

Thanks to the Fort Dodge Messenger for mentioning this program in their recent feature in the Lifestyle section of the April 24, 2021, edition, in the article “Saved from the Wrecking Ball: Central School Offers Museum, Cultural Center.” 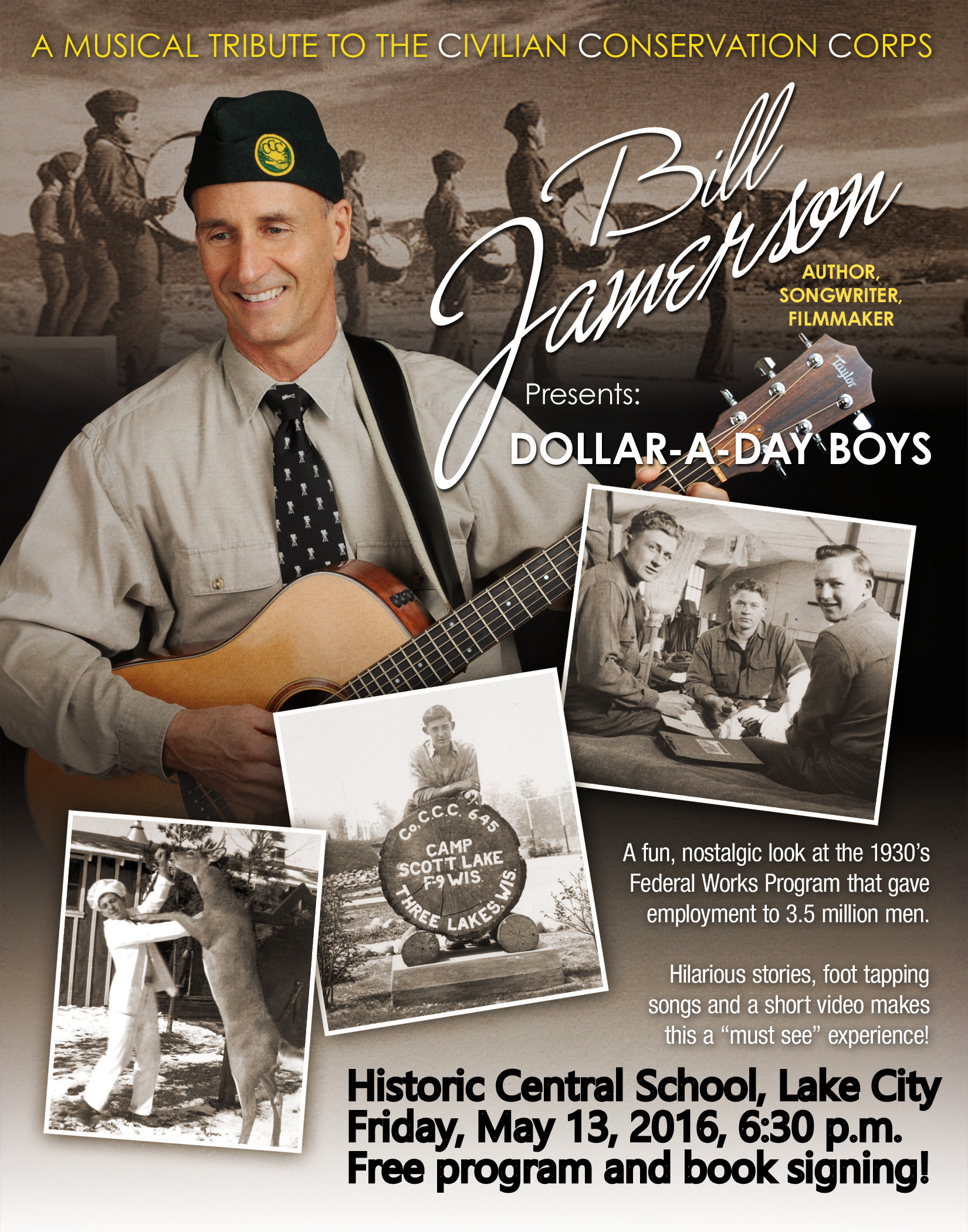 Imagine you’re 17 years old trying to survive during the Great Depression. Food is scarce, jobs are non-existent and some people are turning to petty crime to eke out a living. One day you hear about the Civilian Conservation Corps (CCC), a new job program created by the federal government that pays a dollar a day.

You soon find yourself in rural Iowa, spending long days assisting farmers with soil conservation and helping develop places like Black Hawk State Park at Lake View. Over the next year, you put on 20 pounds, develop good work habits, gain confidence and make life-long friends. The job skills you learned help you find a job when you leave camp. Your experience in the CCC turns out to be the most important event in your life.

Historian, author and songwriter Bill Jamerson of Michigan will share these stories and more about the CCC of the 1930s at Historic Central School at 211 South Center St. in Lake City on Friday, May 13, 2016, at 6:30 p.m. “Dollar-A-Day Boys” is a musical tribute to the program that recruited more than 2.5 million young men and put them to work from planting trees to helping develop America’s growing network of state parks.

This free program is open to the public, and refreshments will be served.

Since 1992, Bill Jamerson has researched the CCC. He produced a documentary for Michigan PBS, recorded a CD of songs, and wrote a historical novel. He presents his popular “Dollar-A-Day Boys” tribute across the Midwest. Dressed in uniform, Jamerson shares stories about the CCC, reads excerpts from his book, and sings original songs with his guitar. It’s a nostalgic program with songs, much laughter and many heartfelt stories.

During the program, Jamerson will talk about many of the interesting CCC enrollees he has met through the years. Some of the songs Jamerson performs with his guitar include Franklin D., written by an appreciative enrollee. Chowtime is a fun look at the camp food, City Slicker, is about the mischief the men found in the woods, and Tree Plantin’, Fire Fightin’ Blues tells the hardships of work. The folk songs range from heartwarming ballads to foot-stomping jigs.

People are encouraged to bring CCC photos or memorabilia to the program. A question-and-answer period and book signing for Jamerson’s book, “Big Shoulders”, a historical novel that follows a year in the life of a 17-year-old from Detroit who enlisted in the CCC in 1937, will follow the presentation.

Passing the legacy to future generations 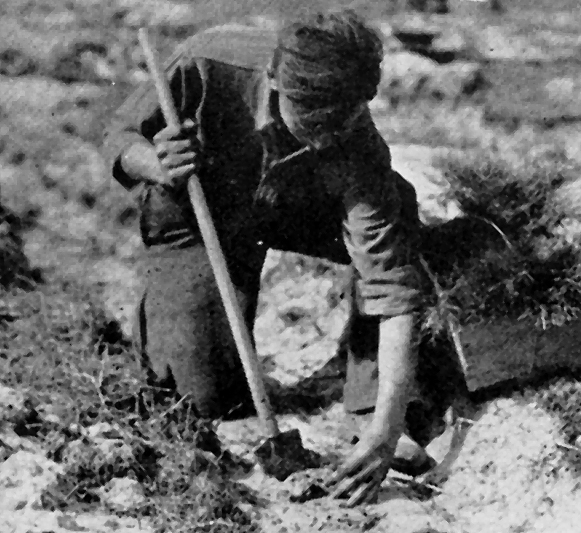 The CCC was a federal works program created by President Franklin Roosevelt in the heart of The Great Depression. During its nine year run beginning in 1933, more than 49,000 men served in Iowa. The men were 17 to 25 years of age. The camps were run by the U.S. Army, with an average of 29 camps in operation in Iowa each year.

More than $48 million was spent in Iowa operating the CCC camps during their nine-year existence. Enrollees were paid $1 a day with $25 sent home to their families each month. The money sent home provided relief for their families who were desperate for food and basic necessities.

The CCC worked on hundreds of Iowa farms assisting with soil-erosion-control projects such as building earthen dams, terracing hills, digging ponds, repairing gullies and planting trees for wind breaks. The CCC men also constructed more than 1,000 miles of roads, erected hundreds of miles of telephone poles and assisted in emergencies, from forest fires to floods. Their most visible work is seen in many state parks, including Black Hawk, Ledges, Backbone, Lake Wapello, Clear Lake, Stone, Lake McBride and Lake Ahquabi.

The men came into nearby towns on weekends and patronized stores, movie theaters, billiard rooms, dance halls, churches and restaurants. Many enrollees met their wives while in camp. The enrollees spent approximately $5,000 a month in nearby communities, which was a boast to the local economy during the depths of The Great Depression, according to Jamerson, who produced the film, Camp Forgotten-The CCC in Michigan, which aired on 58 PBS stations in 1994. To learn more, visit  www.billjamerson.com. 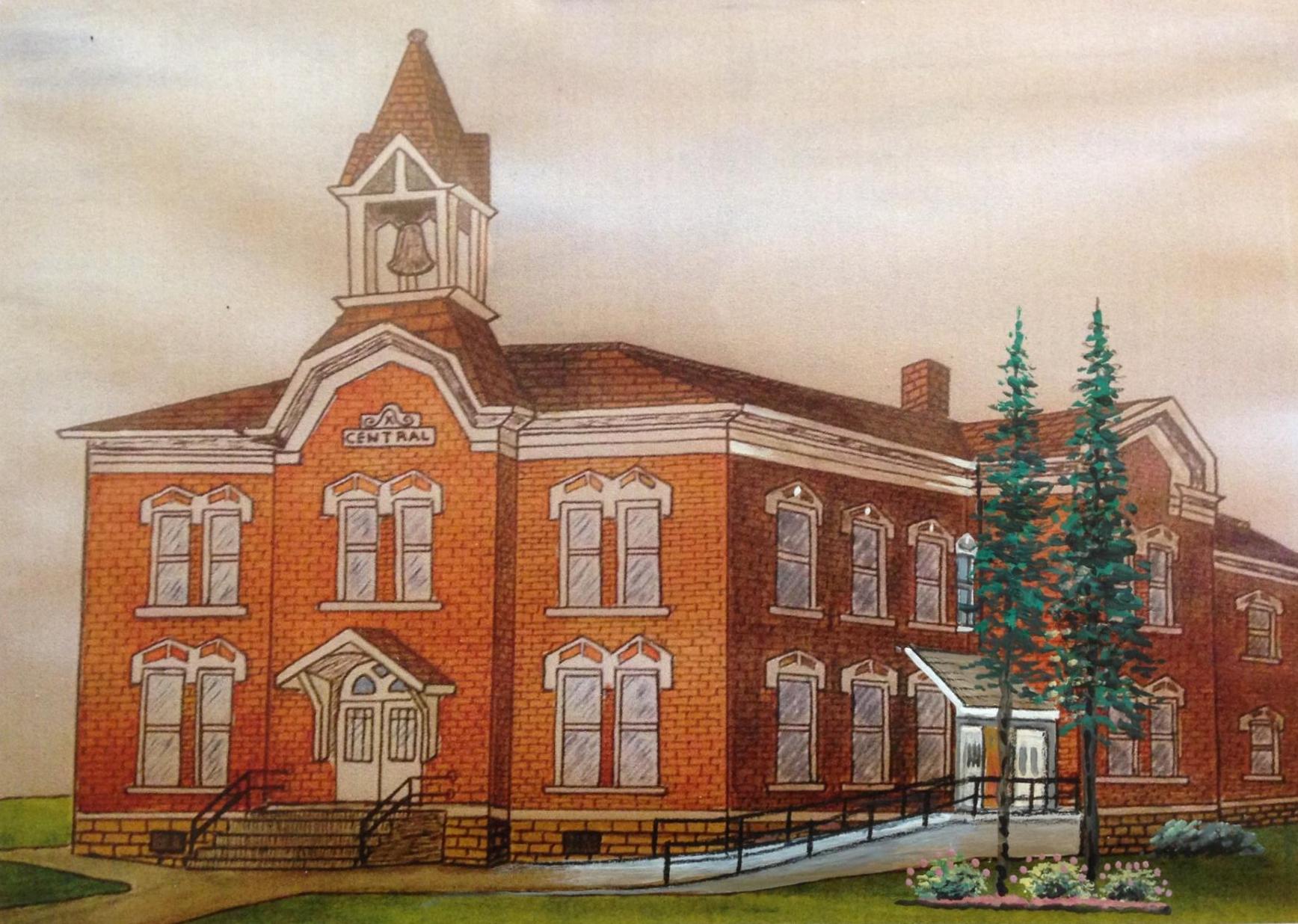 When Central School first opened its doors to students around 1884, handicap accessibility wasn’t a consideration. This accessibility wasn’t incorporated at any time during the long history of the school, which was continuously open until it closed at the end of the 1979-80 school year. It’s time for change.

We are currently in phase 1 of a handicapped accessibility project, which would add a wheelchair ramp to the north side of the building. We received a $5,000 grant from the Calhoun County Community Foundation this spring. We’ve also received support from the Lake City Alumni Association and other donors.

We plan to begin Phase 1 yet this year. We’re also planning ahead for phases 2, 3 and 4 for subsequent years. These phases will include a power door, a chair lift to the second floor and a handicapped-friendly family bathroom.

We welcome your financial support for this project and other ongoing projects at Central School. Since acquiring the building after its closing, Central School Preservation, Inc., a non-profit (501 Â© (3)) corporation has endeavored to preserve Historic Central School as a cultural heritage center for Lake City and the surrounding area. 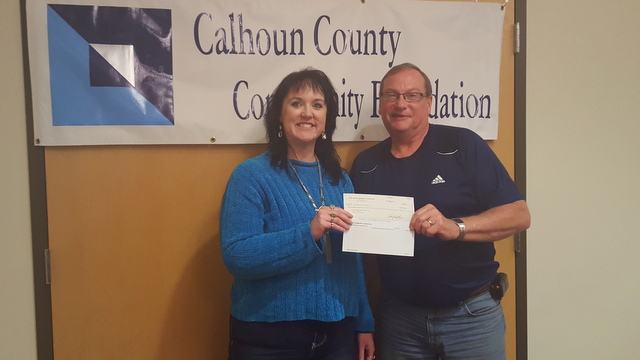 We receive no federal, state or local tax funds for these purposes but depend on donations and grants for all of our operating funds. During the last thirty or so years, the iconic bell tower has been restored, windows have been upgraded, a new roof installed, the building tuck pointed, trim painted and the physical plant maintained in an admirable manner. In addition, partially through a Calhoun County Community Foundation grant we have begun a project of cataloging and labeling of the collection of historical memorabilia which we have acquired through the years.

If Historic Central School is to reach its potential, we need the support of all of those who are interested in remembering and preserving the uniqueness of small-town Iowa.

Our list is a long and in some cases expensive one, but then, it’s a valuable piece of our heritage that we’re trying to preserve. We don’t expect to accomplish it all this coming year, but here goes: 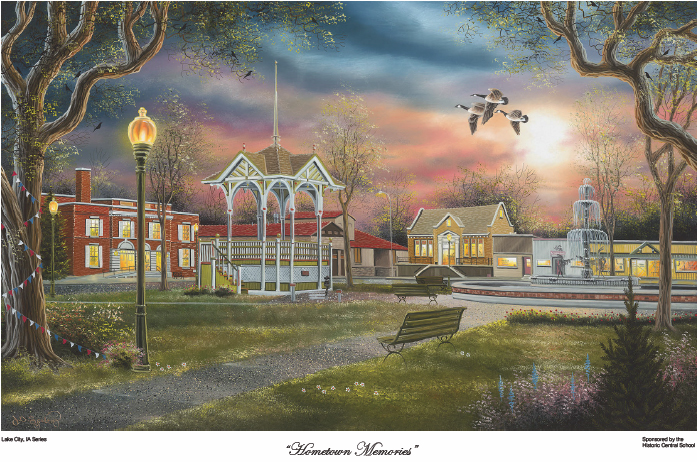 Award-winning artist J.D. Speltz from Armstrong, Iowa, has captured the beauty of small-town Iowa in this classic image of Lake City. Each unframed print measures 10″ x 15″ and goes into a 16″ x 20″ frame when matted.

All money raised through this fundraiser supports Central School. Contact us at 712-464-8639 , or centralschool@windstream.net to place your order today. Thanks for your support!